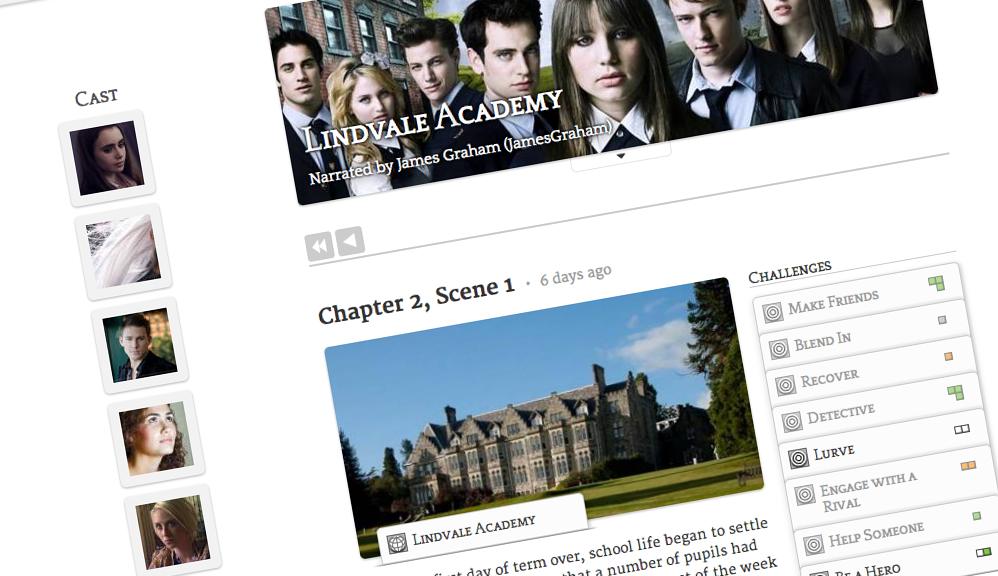 At the time of writing, the Kickstarter for Storium is still live and has exceeded its initial target of $25,000 by more than 600%. If you don’t know already, Storium is a new website designed to make it easy to run story games online, aimed very much at the non-roleplayer. As someone who has never had much success with playing games online before, I was very interested in it and decided to try out its Kickstarter Beta. A group of fellow London story gamers joined me, and we’ve been experimenting with it for the last three weeks.

The first thing to bear in mind about Storium is where it stands in the taxonomy of story and roleplaying games. The game’s own tutorials will explain it much better than I can here, but suffice to say it uses a narrative driven system. There are no hit points, attribute scores or experience points, although the system is very much designed so that characters evolve over time. The game at the heart of the system encourages players to both explore subplots laid out by the game master (“narrator”) and divide their actions between “strong” moves which are typically successful and “weak” moves which are not.

The system at its core is incredibly simple, and one that you could quite easily port to the tabletop or even a larp (indeed, I’m considering doing so at some point with my current game). You can be up and running with a character in minutes and even without the tutorials could probably figure out what you need to do.

It is worth bearing in mind however that the system isn’t really designed for shared narrative control of the type that is common in a lot of story games. At it’s heart is a very traditional divide between game master and player. They’ve promised a future upgrade to establish a more shared narrative experience but in practice the system as it stands gives a player less narrative control than, for example, Apocalypse World and its descendants.

To be frank, the Apocalypse World balance between MC and player is much more to my tastes than what Storium currently has to offer. To a great extent, the game we’ve played over the last few weeks has been an attempt to force the system more into that direction, not always entirely successfully.

Our game, Lindvale Academy* (you’ll need a Storium account to read this page, sadly), is very much inspired by Avery Mcdaldno’s Apocalypse-powered Monsterhearts, albeit set in an English boarding school. Indeed, at set up, I simply took Avery’s descriptions from the Monsterhearts skins and made them “natures” for the players to choose from. Character creation was very smooth and we ended up with five very compelling and different teenagers.

If you’ve played Apocalypse World or Monsterhearts, you’ll know that the first session of your game consists of the MC and players working together to establish the setting. In the case of Monsterhearts, you draw a diagram of the various members of the player’s class at school and go around taking turns to establish who all the other class members are. I wanted to try and replicate that in game, without having to rely on some long message thread or a Google Doc which risked killing the game with dullness before it even began.

What I came up with was an idea to mix the introductory scene with a bit of setting creation. For the first scene, I created a number of one point challenges which the players about individuals in the classroom which players could use to define who they were, as well as offering them a number of assets representing people they knew (who again, they got to define).

This worked very well, with the players quickly establishing a huge range of different characters without me having to do anything, all the while developing a narrative as the various “popular kids” vied to establish dominance of the classroom. The only real issue with that scene was that at some points the narrative was a little out of order as players ended up making their moves at different times of the day. It would be nice to be able to go back and maybe move some of the player moves around so that they make a bit more sense, but it was by no means an insurmountable problem.

For the next two scenes, I attempted to do the same thing as we followed the characters through their day up. As time went on however, I think these establishing scenes became decreasingly useful and increasingly disjointed, as we placed characters in different locations and had to keep switching between the various plot threads.

What the system doesn’t let you do (at least not yet), is run several different scenes with different players at the same time. The remainder of our first chapter consisted of a variety of scenes involving just one or two characters. It quickly became apparent to me that the single character scenes were the least fun; not only did they shut out 80% of the players from the game for a day or so, but they were hard to keep interesting (admittedly, this is partly due to my own limitations as a GM and reluctance to make so called “hard moves”). Much more successful were the double handers, with either the characters bouncing off each other or against a common antagonist.

This leads me to another limitation of Storium in its beta stage: the lack of an explicit way for characters to fight each other (both in terms of fisticuffs and verbal assaults). We’ve tried two ways thus far: one is to set a single challenge that costs more points than the three a single player can use in a single scene, and award the “win” to whoever plays the most strong cards while awarding narrative control to whoever completes the challenge. That has worked okay a couple of times, but has the big disadvantage of benefitting the player who is online the most and is thus more capable of gaming it (for example, by holding back their last card to complete the challenge until the other player has run out of cards).

Much of this sounds rather critical, so I should take a step back and emphasise that these are the frustrations borne of playing a game that I’ve been really enjoying and exploring the limits of, and which appears to have maintained the players’ enthusiasm. We’ve managed to establish a compelling narrative and I’m really enjoying revealing the unfolding mystery and ensuing teenage misery. And as someone whose past attempts at play by forum and play by email have faltered before they even got started, the sheer amount of game we’ve managed to get through over the last three weeks is a selling point.

Overall, I’d have to say that Storium has a tremendous amount of potential. I just hope that with the success of the Kickstarter, they continue to develop it and explore different modes of play. For me, that is a much bigger selling point than having dozens of different playsets at my disposal which, frankly, I am unlikely to use.

* If you’re wondering, the image I used as the banner image for this game is from an Israeli supernatural teen drama called Split. Never seen it, but the picture is nice! 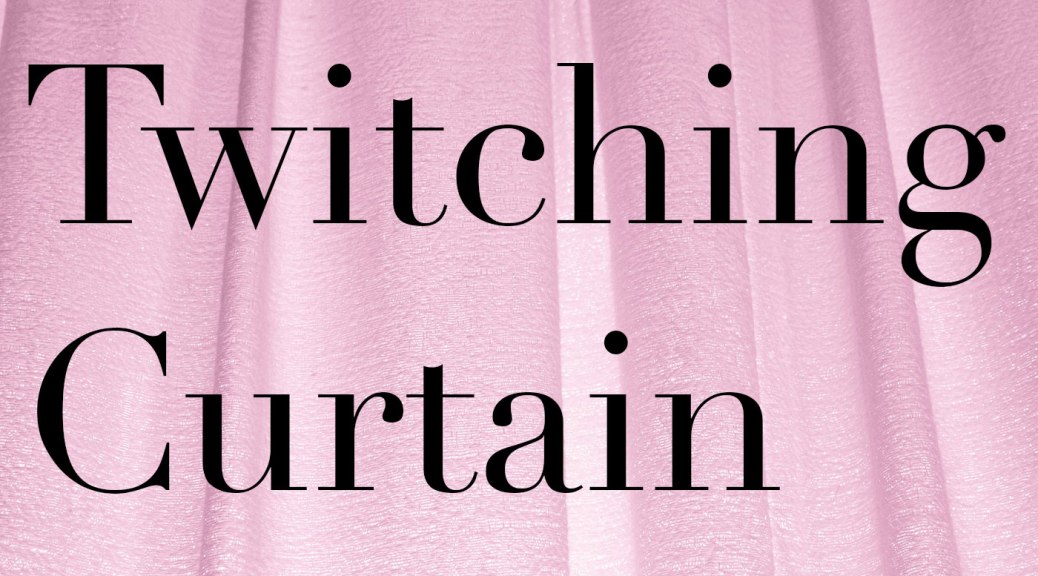 Hi, James here. Hope you’ve enjoyed “episode zero” of our podcast. What feedback we’ve had so far as been incredibly encouraging, so thank you. We’ll be recording a new episode of the podcast soon, but while we wait, I thought I’d use this blog to link to interesting stuff that I’ve come across from the world of story gaming.

First up, there’s Storium, a new story game app for online play, which is currently being Kickstarted – if you back the Kickstarter you can be up and running with the beta version straight away. The lead game designer of the project is Will Hindmarch of Always/Never/Now and Project: Dark fame. Of course, online roleplaying is hardly a new thing – play by forum and email is almost as old as the internet itself. But this is an attempt to devise a system which is specifically designed for online play.

I have to admit that I’ve always struggled with play by email and play by forum – my attempts have come to a grinding halt pretty quickly. On the surface, Storium seems to fix a lot of the problems I have with it: it’s diceless, designed for asynchronous play and the website does the heavy lifting of the system for you. Most importantly, it’s an incredibly simple system. Each character starts off with a concept, a strength, a weakness and a subplot, and play is done by the game master setting a challenge level and players playing “cards” to meet that challenge. Although the beta version uses the traditional GM-and-players format, the players themselves have a lot of narrative control and a “shared narration” version is being considered after the finished game has been launched.

I’ve struggled a bit with getting my head around the system but after reading a few existing games, I think I’ve got the idea and I’m currently in the process of starting my own Monsterhearts-inspired game. The Kickstarter has been successful and they are now fully into stretch goal mode (which involves commissioning a number of guest writers to create more worlds for users to base their games on). Whether Storium has what it takes to still be around in five years time remains to be seen, but I’d certainly recommend you check out the beta and see what you think. 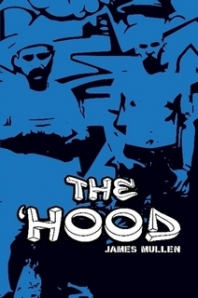 British designer James Mullen has just published The ‘Hood, an Apocalypse World hack for games based in the here and now, inspired by things such as Breaking Bad and The Wire. I haven’t had a chance to check this out so far, but have heard good things about it and love the concept. It’s definitely one I’ll be checking out soon, and you can currently purchase a print on demand version on Lulu.

James has started blogging about the game’s genesis. Interestingly, at one point the game was apparently heavily inspired by Agricola. This reminds me of another Apocalypse World hack (which I recommend) called Sagas of the Icelanders, which I pitched at the London Indiemeet as “Apocalypse World meets the Settlers of Catan“.

If you’re in London, there’s plenty going on. The London Indie RPG Meetup continues to grow, with its regular monthly meetup taking place this Saturday (19 April) and a new monthly weekday meetup scheduled to have its second session on Wednesday 7 May. In between on Saturday 3 May, Twitching Curtain participant Anita Murray is going to be hosting a “playstorm”. Like a regular Indiemeet, it will comprise of two sessions. However, this time the first session will entail designing a game which will be playtested in the second session. It sounds quite exciting. Check them all out on the Indiemeet meetup page.

That’s it from me for now. Think I missed something out? Give it a plug in the comments below! Thanks.

A Podcast about story gaming, roleplaying games and freeform